On July 25 the NDSGA held their first of two golf tournaments for 2017. This one was at the Jamestown Country Club on a beautiful day which had just a spit of rain at the beginning. Most of the growers were saying they would pay double golfing fees if the tournament was rained out as the reports from nearly everyone outside of the Red River Valley was hoping for moisture. There was talk of dicamba, aphids and the crush plant financing efforts amongst the participants, a good time to meet new people and see old friends. I was able to play with board members Josh Gackle, Monte Peterson and Sam Landman. Once I saw Sam hit the ball I thought we had a chance. Then Josh sunk a couple of bombs for birdie on our first three holes and I really believed we could contend. Turns out that was the end of the magic and I was no help. Golf is a frustrating game when one is not nearly as good as they think they are which is my situation. However, it was so much fun with those guys that it really did not matter. From the sights and sounds around the course, every group was enjoying themselves. Please do consider joining us for the second tourney August 29th at Maple River Golf Club. Good food (lunch and supper) and company will be pretty much guaranteed as these folks know how to run a tournament. Interim legislative committees are gearing up and I will be attending an Oakes irrigation event next week. Best of luck with Mother Nature folks, I know you growers have done all you can and the outcome is in her hands. 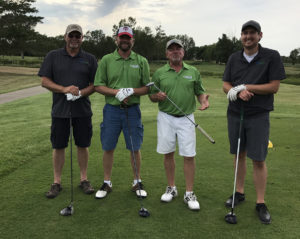